We found a Juul and other vaping gear in our 14-year-old son’s backpack recently and confronted him. It took some pressure, but he eventually owned up to it. He also eventually accepted our zero tolerance for vaping due to its harmful side-effects, most notably nicotine addiction. Well, kids will be clever, and now he’s asked us if he could vape without nicotine. He says vaping “calms” him and that everyone is doing it every day, and what’s the big deal if there’s no nicotine in it. My husband and I see his point of view but still feel in our guts that zero tolerance is best. We haven’t gone back to him yet because he’s a good debater and we don’t know exactly what to say. He’s also getting too old for us to say “because we said no” without offering a sound explanation to the no. Is vaping without nicotine a problem for a 14-year-old? What are we supposed to do if all of his friends are doing it? Thank you for your thoughts. – Confused Parents

Your parental intuition here is correct, and there are a number of reasons why you shouldn’t allow your 14-year-old son to Juul – even without nicotine. First, possessing and/or using vape products of any kind under 18 is illegal. Thus, if your son were to get caught with a Juul at school, for example, there would likely be some pretty hefty consequences for him. Second, Juuling or e-cigarette use is known to cause popcorn lung and other health problems. Popcorn lung is a very real and dangerous risk that occurs when you inhale diactetyl into your lungs; diacetyl is one of the many harmful chemicals in Juuls and e-cigarettes. Popcorn lung symptoms are similar to chronic obstructive pulmonary disease (COPD) and include: shortness of breath, wheezing and coughing. Popcorn lung can also become a chronic and irreversible condition. Third, endorsing Juuling for your 14-year-old son as parents sets a bad precedent. You can let him know that you’re not allowing him to Juul at 14 for the same reasons that you’re not, and society doesn’t, allow him to drink alcohol or drive a car – juuling at 14 is simply not developmentally/age-appropriate behavior.

While your son is likely correct that others in his life are juuling, I think he’s exaggerating the number; it’s hard for me to believe that “everyone is doing it every day.” Regardless, I think you should keep a closer eye on who your son is spending his time with and what he’s doing with them. Teens are curious about a lot of things, and exercising poor judgment and poor impulse control socially can go with the territory adolescence.

Your son’s belief – and it’s probably accurate – that Juuling helps to “calm’ him is also a red flag. Turning to a substance to manage the stresses of life isn’t good for anyone; at 14 your son shouldn’t be using his body vis a vis Juuling to process his negative emotions. Today, it’s Juuling that calms him, but tomorrow it could be weed or alcohol or something far worse. Coping with a substance is a bad habit for your son to pick up at his young and impressionable age.

In the end, it’s always our job as parents to help our children learn to make good decisions and to set them up to later becoming capable adults. So beyond the Juuling, perhaps this is a good time to reassess how your son is doing across the important areas of his life – his home life, his social life and his academic life. Is your son applying himself fully at school? What after school activities is he engaged in? Is he involved in a sport or does he exercise? How does he spend his time over the weekend? How’s he doing emotionally? Definitively saying “no” to juuling or vaping is the right thing to do here for the reasons I’ve outlined, and if something is out of balance or lacking for your son, I think this is also a good time to address that as parents. 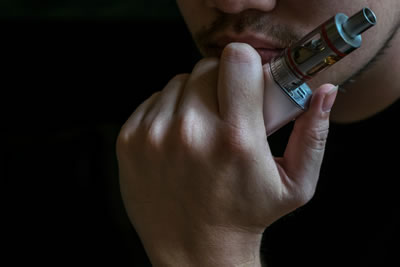 Michael Oberschneider, Psy.D. is a clinical psychologist in private practice. He has been featured on CNN, Good Morning America and several other outlets. He can be reached at 703 723-2999, and is located at 44095 Pipeline Plaza, Suite 240, Ashburn.