Our son is 7 years old and he and his friends love their Nerf guns and they especially love having Nerf gun battles in the neighborhood.  This past Sunday one of the mom’s in our son’s friend group emailed the entire neighborhood listserv to ask that neighborhood children no longer be allowed to play with Nerf guns at the main public area or playground because she said “it promotes violence” and it’s “insensitive in the wake of the Florida school shooting.”  I emailed her back to nicely let her know that I didn’t see a problem with Nerf gun fun for 7-year-old boys on our playground, and she rudely replied that I was being “ignorant” and that “protecting our kids from gun violence needs to start at a young age.” I don’t plan to restrict my son from his Nerf gun battles on our playground (and a lot of parents in the neighborhood don’t), but we live in a really close-knit community and I also don’t want things to escalate.  Any advice? 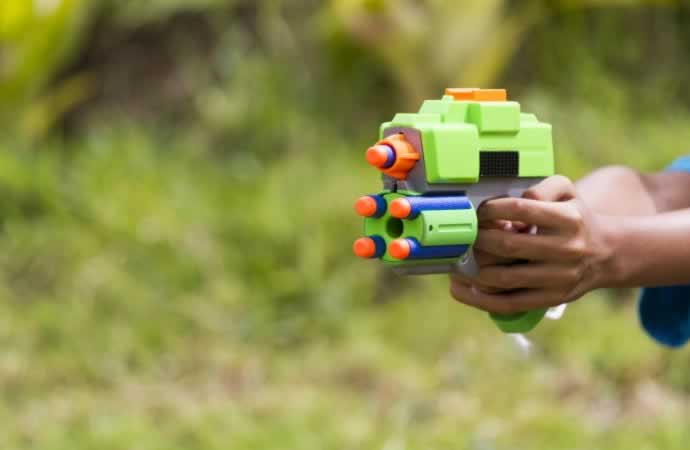 Research studies have shown that there is no link between young children playing with toy guns and later aggression and violence.  In fact, gunplay can actually serve to encourage symbolic play, which is developmentally good and appropriate for younger children.  For example, younger children playing cops and robbers with their guns aren’t just shooting at each other; they’re also learning about themes such as justice, heroism, power, dominance and right and wrong in their roles alongside their peers.

So, as long as the Nerf gun battles aren’t excessive, and as long as your son’s playtime is balanced with other sorts of activities, I don’t see a problem with it.  However, I don’t think that charging ahead with more Nerf gun battles on your neighborhood playground is a good idea knowing how upset one of your neighbors is over the activity.  Yes, with the most recent tragic school shooting in Florida, and the many other tragic school shootings over the years, the topic of guns has understandably become a sensitive topic for many parents.  Not knowing why the Nerf gun battles have upset your neighbor as much as they have, I think it’s best to respectfully err on the side of caution.

Perhaps you could host a Nerf gunplay date battle at your house or in the backyard with the other parents who are fine with it.  Since, as you write, you “live in a really close-knit community,” you might also want to email the upset mother back to smooth things over.  You could let her know that, while you don’t see Nerf guns in quite the same way as she, you truly didn’t mean to upset her and you will respect her request to no longer have Nerf gun battles in the public space of your neighborhood with your child.  In the end, she will likely feel better with that gesture, and you can all hopefully move on from this.  Compromising seems to be your best option; your son and his friends will grow out of wanting to play with their Nerf guns soon enough, but you may be living alongside your current neighbors for many years to come.