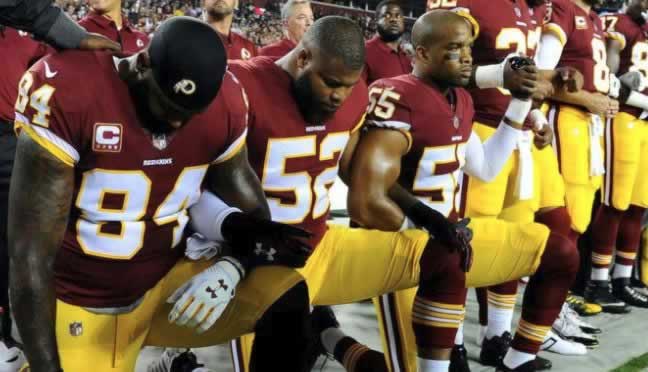 The ongoing contentious debate over kneeling for the National Anthem escalated this past week in response to President Trump’s position that the act is disrespectful to our flag, our military and our nation as a whole.  Those in opposition to Trump’s position have argued that kneeling during the national anthem is their constitutional right and a symbolic statement of solidarity to call attention to serious social injustices in the US today – incidents involving police brutality, racism, inequality, etc.

There’s no denying that the argument over kneeling for the National Anthem isn’t going away anytime soon, but regardless of your feelings or opinions as adults on this topic, it’s important to remember that our younger children are the most at risk emotionally as a group.

As a child psychologist, I have been dealing with the emotional impact of the National Anthem controversy with a number of my younger child patients.  While I am perforce in the role of treating children with emotional and behavioral struggles, there are times when larger societal issues can enter the therapy space — and this is certainly one of those times. Many of my younger child patients have broached the topic of kneeling with me this week with a heightened sense of confusion, anxiety and even anger.

Children have said, “We were at the Redskins game and we all booed when they didn’t stand for the National Anthem” and “I’m not a Steelers fan anymore…they didn’t even have the guts to come out of the locker room” and “Colin Kaepernick should move to Canada” and, “Drew Brees did the right thing to stand.”  One client even proudly displayed his recently purchased Alejandro Villanueva jersey and commented that Villanueva was his new favorite player because he stood for the Anthem with his hand on his heart.

Not a single one of my younger patients has asserted support for any of the players or teams that kneeled this past week – even for players for whom my younger patients are fans. Of course, parental influence and socio-economics may have something to do with the forceful one-sided view from these youngsters inasmuch as the median household income is over $125,000 and the median home value is $478,000 in Loudoun County.  By no means then do the voiced concerns for my younger child patients represent the concerns of all younger children in the US; demographics likely bring about divergent interpretations on this topic for children.

But beyond socio-economic, cultural and other demographic differences, there are developmental and social factors that, for the most part, are universal for younger children in this moment.

First, younger children don’t possess the cognitive (or emotional) resources to truly grasp the complexity of the kneeling or what it represents; using logic to solve problems in relation to others and the larger world toward more involved solutions requires abstract reasoning skills, which typically don’t develop until around 11 years of age and older.  Just as 6 or 7-year-old children do not fully understand and cannot accurately explain the meaning of a metaphor or analogy, expecting a younger child to comprehend the social, cultural and racial conflicts behind the National Anthem debate would also be unreasonable.

Second, younger children are rule bound, and they are expected to listen to and obey the adults in their lives, so challenging authority in this way is also not acceptable to them.  A veteran second-grade school teacher shared with me this week that in her many years of teaching not once has one of her students not stood for the Pledge of Allegiance, nor has a single parent made such a request.  For the elementary school child, you stand for the National Anthem because you’re expected to and it’s the right thing to do, and younger children will have that same expectation for professional athletes with the National Anthem.

But while younger children tend to be more black and white or concrete in their thinking and problem solving — right vs. wrong, good vs. bad, etc. – life events sometimes force them to employ some degree of abstract thinking in recognizing the underlying lessons and meanings of more grey moments.  Why does God let people die?  Or if there’s love in my family, why are my parents divorcing?  Even younger children, with our assistance, can accomplish some understanding to these sorts of complex questions and realities when compelled.

Professional sports play such a large role for so many children that, in my opinion, the current National Anthem controversy and debate is an unavoidable teaching moment for parents.  Thus, I offer the following 5 tips to help parents to better manage what is happening right now for their younger children.

Michael Oberschneider, Psy.D, is the Founder and Director of Ashburn Psychological and Psychiatric Services. Dr. Oberschneider has been featured on the Good Morning America, CNN and other popular media spots as a mental health expert. He has also received the Washingtonian Magazine “Top Therapist” honor for his work with children and teens.