The Psychology of Your Child’s Halloween Costume

The Psychology of Your Child’s Halloween Costume

Hero, monster, princess or something sexy? A costume can say a lot about a child’s development

Halloween is one of the most fun times of the year for children. The meaning of Halloween runs deep in our culture — it’s a time to celebrate, a time for treats, a time for being spooky or silly, a time for costumes, and it’s a time to enjoy family and friends. When we think back to some of our fondest childhood memories, most of us have at least one or two Halloween moments.

And what costume your child selects, can say a lot about who he or she is or where they are developmentally.

Gore and the macabre. Many young children are fascinated by monster costumes, but what is the message behind the mask? Perhaps Frankenstein’s monster symbolizes science gone bad and what can happen when man plays God too well. Vampires are believed to symbolize repressed sexuality, and others have posited that zombies symbolize excesses of consumer capitalism and dissatisfaction with conformity and a loss of individuality. Is it a coincidence that zombies were first introduced in film after The Great Depression, and they gained in popularity in the media after the last recession and during a time when the U.S. economy struggled again?

Of course, children who are drawn to monsters are likely unaware of any of their unconscious motivations, but they are certainly there. In my opinion, for example, children are drawn to zombies because as far as scary creatures go, zombies are a relatively safe choice; zombies are slow, they are stupid, and one could easily get away from a groaning pack of them if needed. Children are sensitive, and I think they also empathize and identify with the plight of zombies; zombies were once human, and they roam about blindly just wanting to get back to being who they were.

Pretending to be a monster on Halloween can also give a child a sense of control and power — two things children do not normally have a lot of. Developmentally, children have to address and work through various fears and problems as they grow up, and pretending to be a monster certainly makes monsters, or whatever fears or challenges may be there, a little less scary and unsettling. When a child dresses up as a monster, he or she is using his imagination to proactively gain confidence and a greater sense of mastery in the world.

Princesses. Children tend to pick costumes that personify their gender roles, and this is certainly the case for many little girls who are fascinated with and enthralled by princesses. What little girl does not want to be beautiful and special and to get a lot of attention for being both? It’s even in our colloquial vernacular for girls to be “daddy’s little princess.”

Some parents are concerned that our culture is overly obsessed with body image and appearance, and encouraging little girls to dress up like princesses only feeds the problem. In my opinion, girls will grow up to be strong and confident because of the lessons we teach them and the values we instill in them as parents, but if your daughter wants to pretend to be a Disney Princess for Halloween, let her. Your daughter will also likely run into many other Frozen Elsa’s or Anna’s or Belle’s, Moana’s or Ariel’s this year, and thus her costume will help with her peer socialization. On the other hand, if your daughter wants to dress in a more gender neutral or masculine costume, that is perfectly fine too.

Heroes and villains. Spiderman, Batman, Thor, Wonder Woman, Superman, the Incredible Hulk, Iron Man, and other superheroes are always very popular Halloween costumes. Developmentally, children like superheroes as much as they do because they can identify with the simple and concrete message that there is good and bad in the world. Up until about 10 years, children are black-and-white in their thinking and they cannot yet process or understand the more grey or abstract aspects to people or behavior. For example, older children and adults can appreciate the assorted complexities of Batman’s psyche (i.e. the impact of his parents’ death on his later motivations to fight crime), and his vigilante approach to justice, but your 5 year old just wants to see Batman throw the joker in jail because Batman is good and the Joker is bad. Police officers and fireman costumes are also popular with children who have internalized the message that it’s good to be good.

Being a villain gives a child freedom in their imagination to be playful with the idea of being good or bad. Children are curious about villains and bad guys; they know that people are not supposed to be mean or bad or evil, so they wonder what makes them that way. This is perhaps why Darth Vadar is always around on Halloween. Children who like Star Wars know that Vadar is a bad guy to be feared, but they also know his back-story and this makes him somewhat of a sympathetic character. Ask any young Star Wars fan if Anakin is good or bad, and the child will most likely say that he is good. Ask that same child if Darth Vadar is good or bad, and he or she will most will say that Vadar is bad. But when you ask a young child to elaborate on why Anakin became Vadar, he or she will have trouble explaining things. That is because younger children do not possess the intellectual resources to fully comprehend Anakin’s catastrophic emotional conflicts — his tortured guilt over his mother’s death, his fragile sense of self in relation to important others that followed, his compensatory hunger for power or the ways in which the Chancellor capitalized off of his emotional vulnerabilities to turn him to the dark side.

Costumes with guns, swords and other sorts of weapons. Given the numerous mass shooting tragedies in the US in recent years, more and more parents are concerned about the presence of guns in their children’s play and at Halloween. So, why are children, especially boys, so into guns, swords and other sorts of weapons and should we restrict them at Halloween? Evolutionary psychologists have argued that our children’s fascination with weapons may be deep seated in the human experience and psyche. Humans were once hunters and gatherers, and children are just playing out what is now in the fabric of their DNA; their survival instinct as primitive man. Freudians might instead assert that that a young boy’s interest in guns, swords, cannons and other sorts of weapons actually represents phallic symbolism and a normal phase of development.

Regardless of the motivation, I think children’s costumes with weapons are fine as long as there is not an over emphasis on or preoccupation with the weapon. Sure Jake and the Never Land Pirate costume has a sword, and the Woody costume from Toy Story has a gun, and several other costumes have weapons — ninjas, Star Wars characters, policemen, soldiers, etc. But for all of the costumes with guns, there are also so many other fun and important accessories to get your child excited about.

Going sexy. As human beings, we are sexual beings, and the expression of sexuality can even show up in our children’s costume requests. But what do fishnet stockings, push up bustiers, high heels and tons of make-up have to do with a child’s Halloween costume, you might ask? A lot if you’re a tween or teen who is pretending to be Olivia Rodrigo, Avril Lavigne, or a naughty French maid or naughty nurse. Sadly, the sexualizing of Halloween costumes for girls is occurring at younger and younger ages.  Party City’s reputation, for example, was blemished a few years back when a mother of a toddler wrote an open letter to the company complaining that the company was purposely sexualizing toddler costumes in their marketing.

While it is normal for children to want to assert themselves in different ways as they mature out of childhood and into their teen years, publicly adorning sexually suggestive or sexually oriented costumes for Halloween is inappropriate. Children, tweens and teens will identify with different sorts of individuals in the media and in pop culture at different stages of development; and, as parents we will like some of those identifications, but we will probably not approve of all of them.  Wanting to dress up like Taylor Swift as a girl is one thing, but wanting to dress up like a sexy Taylor Swift should be an important teaching moment for parents.

As I often remind parents, it’s always important to help our children to make the best choices they can, but it’s also okay to allow our children to playfully explore the different parts of themselves and their interests, and Halloween is a great time to do that.  So, Happy Halloween 2022 to all the monsters, superheroes, princesses, pop stars, etc., out there! 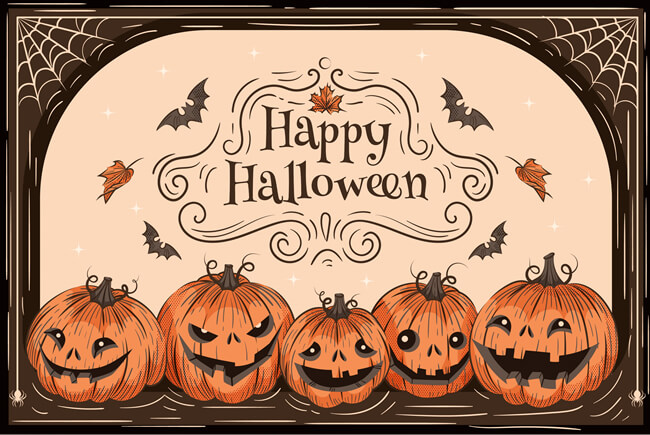 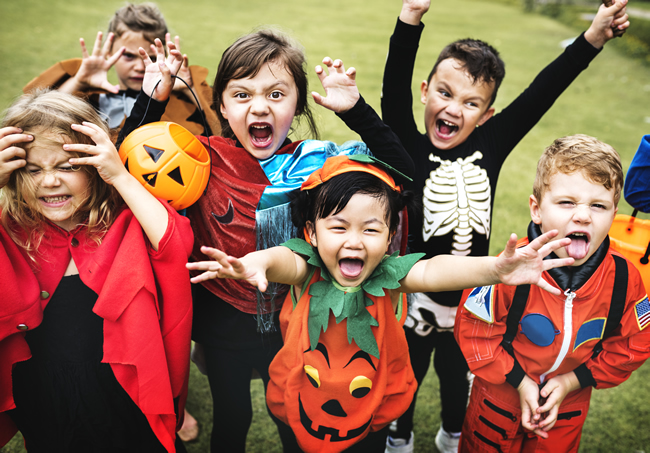 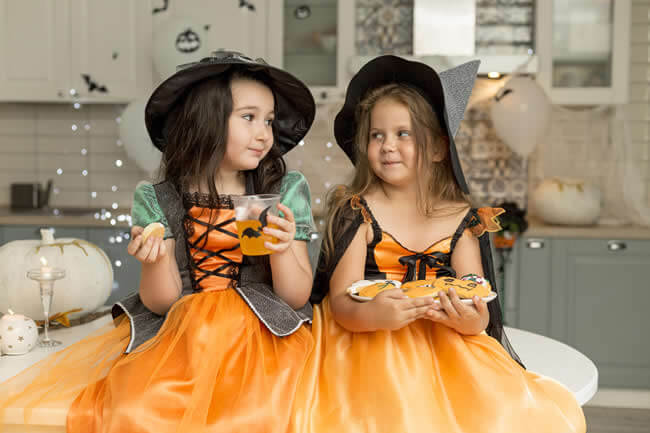 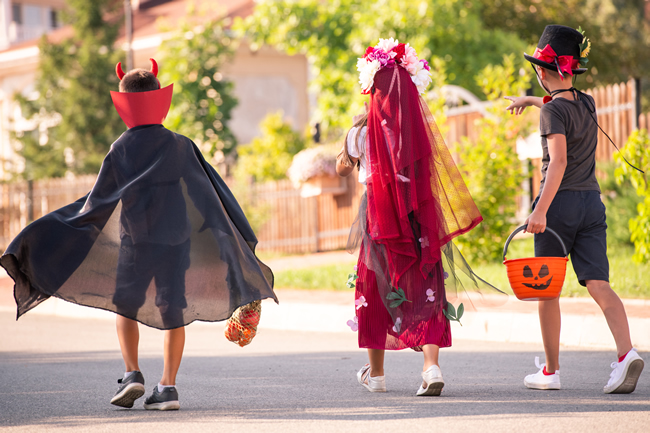 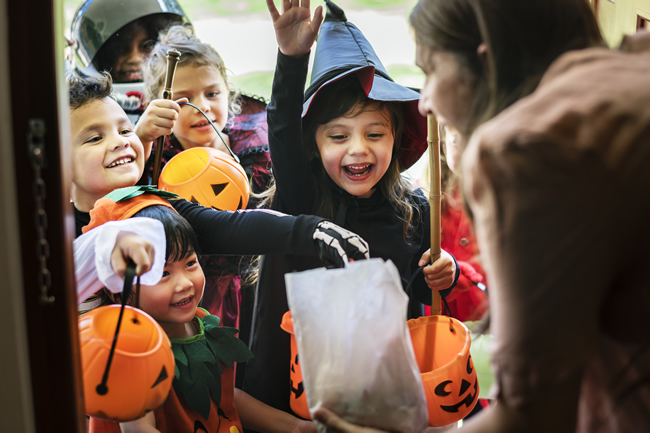